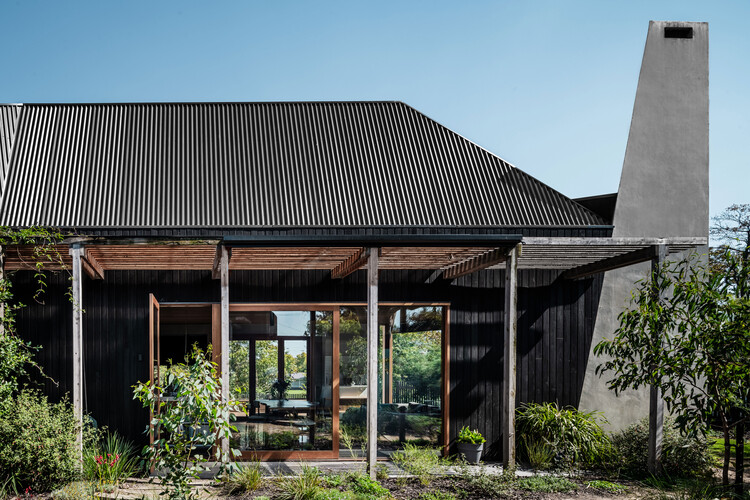 Text description of the architects. Keep House is where a couple lives, works from home and raises their two teenagers. Its corner block is wedge-shaped, its rounded edge facing a park across the street, its back garden culminating in a triangle. The block is elevated from the street, making it visible along its extensive street frontage and from the park. They needed a home that would combine the parkland and garden with the family, yet maintain their privacy on the naturally visible lot.

For them, Keep House is forever. It’s theirs and it keeps them wrapped up and safe. People say that your home is your castle, and we’ve often talked about ideas of the medieval keep: the tower within a castle compound, fortified as a haven in case enemies invade the rest of the castle. Similarly, Keep House protects the privacy of the home from the public of its facade. Of course, it’s also a play on the popular idea of ​​a “keep” or “forever” house.

After experimenting with many arrangements to place the house on the lot, we settled on an elongated shape that bent into an angular C, essentially forming three wings. It is set back from the curved facade and pressed to the diagonal boundaries of the property, leaving a small, wind-protected triangular garden at the rear. The C-shaped house folds around a native garden courtyard, allowing the rooms to look out into the garden and then through the rooms opposite. Porches line the courtyard, blurring the boundary between the garden and the interior space. It is a naturally Australian landscape and a counterpoint to the manicured European park opposite.

There is a transition of privacy across the different landscape zones: the exposed front lawn and vegetable patch, the native garden courtyard and the rear triangle accessed from the fully fenced media room. Keep House shows how architecture can explore shades of privacy between what is internal and what is happily revealed to passers-by. It’s tailored for a family that needs spaces to come together and spaces to be apart. The living spaces, both indoors and out, are quintessentially Australian and, as Robyn Boyd has said of other homes, ‘do the essentials as simply and directly and pure as possible’.